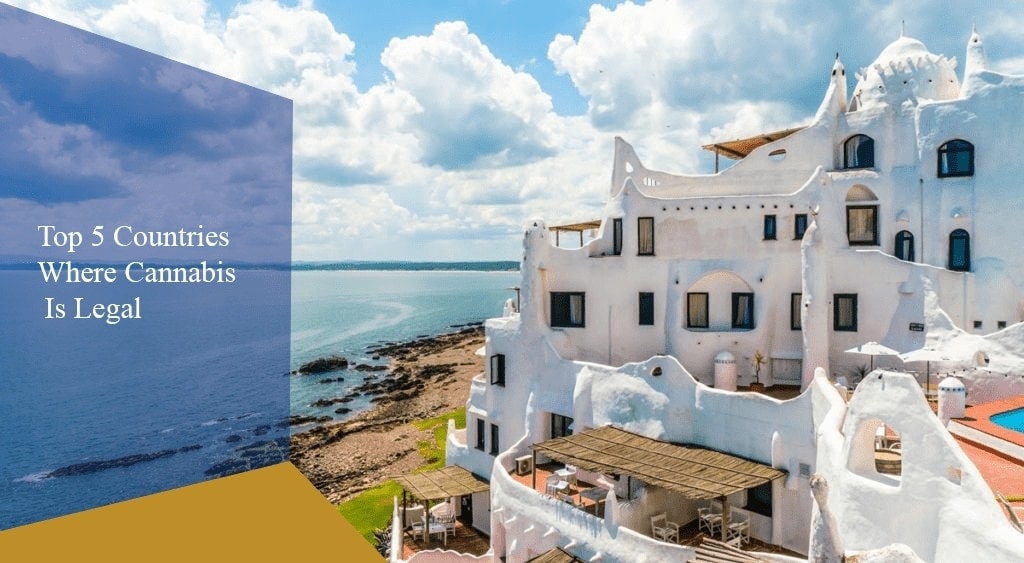 What a time to be alive! It’s been 2 years since Canada has legalized marijuana, giving many Canadians the ability to buy weed online and in retail stores. Although many countries are still slow to accept medicinal marijuana, there are a few progressive countries that truly understand the importance of this holy green medicine and have fully embraced it. This article will introduce the Top 5 countries where marijuana is now legal. For all the weed lovers who love to travel and smoke (or eat, vape, dab) this article is just for you. Make sure to read to the end for a surprise country that you would never expect to be on this list!

Sitting at the top of the list and the first to legalize recreational cannabis is Uruguay. In the past, personal possession was never criminalized but judges were allowed to determine whether possession was personal or commercial. In December 2013, President Jose Mujica signed a bill to make recreational cannabis legal, paving the way for Uruguans to fully enjoy this wonderful plant without fear of criminal punishment. This bill was aimed at tackling drug-related violence and reducing profits for organized crime, while allowing users to cultivate their own plants for non-commercial uses and farmers the ability to operate in larger scale productions. The Uruguay government, however, would control the market from production to sale. Everything from price, quality, and maximum production volume was determined by the government. In order to buy weed in Uruguay, users must be at least 18 years or older and be registered in a national database. Legislation also limited the maximum number of crops per household to 6 and no more than 480g, while smoking clubs were allowed to grow 99 plants each year. But even with such a progressive move, there are some drawbacks. Foreigners are prohibited from buying cannabis.

2. Peru:
This one is a little tricky, but if you follow the rules (as you should) you will not have a problem. In Peru, recreational cannabis use is technically illegal, however possession is decriminalized due in part to Art. 299 of the Peruvian Penal Code. Based on this article, it is legal to carry eight grams of marijuana and two grams of derivatives including concentrates, edibles, extracts, etc. But only for “your own and immediate consumption.” As long as you possess less than eight grams or marijuana and clearly state that it’s only for personal use and not sale, you won’t have an issue with the authorities. Keep in mind that “the possession of two or more types of drugs” is considered a crime. So, if you’re carrying weed and cocaine, you will be in trouble for committing a crime.

Also keep in mind that police are notoriously corrupt in Peru and often don’t know the law as they should. Corrupt police often try to pressure travelers with the hopes of getting some form of bribe. Best way to avoid any legal issues is to carry the legal amount, not carry two different types of drugs, and avoid using cannabis in public.

Laws in Peru get tougher when you traffick marijuana in significant amounts and if you sell to a minor. 100 grams or more is considered trafficking and the punishment can be very severe, up to 15 years in prison.

When you think of Colombia, you often think of cocaine, cartels, and probably the hit TV series Narcos. But did you know for almost a decade, marijuana has been decriminalized? It’s true. A country with a rampant drug problem is also a pretty progressive one. In the past 15 years, Colombia has spent more than $140 million fighting cartels and drug traffickers. In Colombia, you can enjoy marijuana and grow up to 20 plants and aren’t in possession of more than 20 grams.

What an amazing country Argentina is by being the first country in the world to provide free medical marijuana. In March 2017, Argentina passed laws to legalize the use of cannabis, but strictly for medical purposes. However, one can simply get a prescription by visiting a licensed physician (we know how easy that is here in Canada).  The law doesn’t permit patients to grow or produce their own marijuana, but are able to get access through health care providers, however you can’t buy weed online just yet. Argentina is one of the first countries to provide patients marijuana for free through their public healthcare system. Recreational cannabis is technically still illegal but due to its public acceptance, police tend not to enforce the law for small possession of cannabis. But if you’re caught on the streets, you might have to pay a bribe to avoid any legal issues.

Cannabis is illegal, but decriminalized for personal use. Due to its wide acceptance, recreational cannabis is tolerated and readily available in cannabis coffee shops. But it wasn’t always like that. In 1913, Netherlands had criminalized cannabis until about 1972 where the Dutch government relaxed legislation by dividing drugs into levels of dangerousness and making possession up to 30 grams a misdemeanor. Amazingly, coffee shops have been openly selling cannabis since 1976 to recreational users. Fast forward to today, cannabis can still be purchased in coffee shops, but you can also buy weed online. All in all, the Netherlands is extremely progressive and the government as well as authorities are lenient towards cannabis.

You’ve made it to the end. But wait, there’s one more country where cannabis is legal, and surprise it’s not Jamaica.

Since it’s difficult to get any sort of information about North Korea, the information that is available to the outside world is that cannabis is legal or tolerated at the very least. In ancient Korea, cannabis was known to be an important crop in use as hemp fabric. Sources claim that cannabis is actually widely used and tolerated in North Korea and it’s common for North Koreans to cultivate their own marijuana. One can also harvest the readily available plants that grow in the wild. So SURPISE! This badass, power hungry, tyrannical country is actually more progressive than some would think. Even more so than the land of the “free”, America.